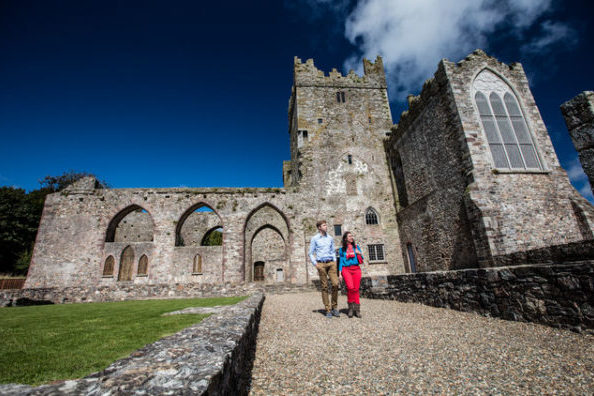 The Norman conquest of Ireland resulted in the foundation of new Cistercian abbeys such as the one here at Tintern on lands granted by William Marshal. The Cistercian monks established rural abbeys which were surrounded by large  and profitable monastic farms. In the 13th century the monks at Tintern were farming 9,000 acres of land.

Religion and Trade
As well as growing large amounts of grain and other food to feed themselves the monks produced a significant excess for sale on international markets. The siting of the abbey beside Bannow Bay allowed the monks to transport their goods abroad right from their own doorstep. From here the monks could also sail across the Irish Sea and up the Severn and Wye rivers directly to their mother house at Tintern in Wales.

Shepherds to their Flocks
During the 12th and 13th centuries the population of Europe  was increasing and in need of clothing. The Cistercian order  was perfectly placed to capitalise on this growing market and became heavily involved in sheep farming and the production of wool. Here at Tintern, and at outlying grange farms, the monks tended to flocks not so much for their meat as for their valuable annual crop of wool.