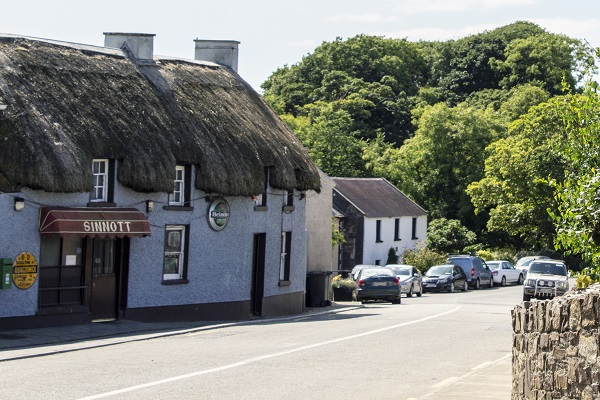 Duncormick is located on the River Muck, a strategic  location with a long history of settlement. A prehistoric promontory fort overlooks the river and St. Peter’s Church stands within an early medieval ecclesiastical enclosure. A holy well along the river is dedicated to St. Clomaun.

Duncormick and the Normans
Following the arrival of the Normans the manor here became a holding of the de Londres family and an earthwork castle known as a motte was built. In the 14th century the land was acquired by the Meiler family. By the 15th century a stone castle, which has since disappeared, stood on the promontory fort.

International Trade
Archaeological excavations in Duncormick have uncovered pieces of local and imported medieval pottery. When they settled in this area the Normans imported wine along with glazed jugs from England, France and beyond. These discoveries are evidence of the importance of international trade to the  Norman economy. The local plain domestic pottery which has been uncovered here is known as ‘Leinster Cooking Ware’.

The Potter’s Wheel
The Normans introduced the potter’s wheel to Ireland in the late 12th century. This made the production of clay pots and vessels much faster.

There is still a very strong culture of handmade craft in  Wexford. The Norman Way is a ‘Wexford Trail’. There is also a ‘Craft Trail’ in Wexford where local craftspeople and their  work can be found and enjoyed. There are also Garden, Heritage, Walking, Cycling and Adventure Trails to enjoy throughout County Wexford.