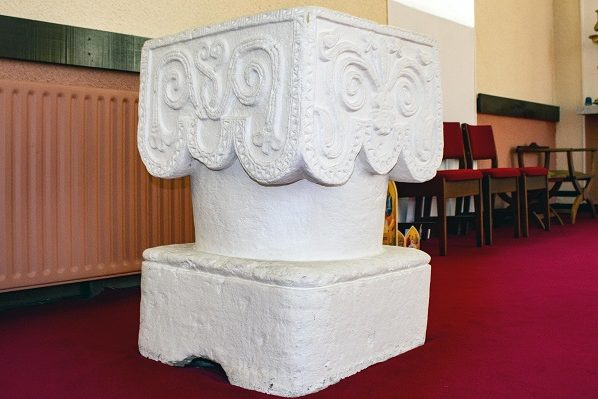 The church in Carrig-on-Bannow contains the Bannow Font, a baptismal font which is one of the finest examples of medieval carving in the region. The style of carving on the font is known as ‘Romanesque’.

The Bannow Font
The Bannow Font is one of a trio of such fonts in Wexford  which date from the early years of the Norman settlement. It was moved here in the 19th century from the ruins of St. Mary’s Church in Bannow. The font is carved from Dundry stone.

Dundry Stone and the Shipping Route to Bristol
Dundry stone is a type of fine limestone quarried near Bristol in England. Norman stonemasons valued it because it is relatively soft and can be carved easily.

The Normans used Dundry stone extensively in Ireland from  the late 12th century in castles, abbeys and churches. The Bristol trade route was one of the most important Norman trading routes and the boats which sailed from Bristol landed at many Irish port towns.

In County Wexford you will find Dundry stone at Dunbrody Abbey, Tintern Abbey, Fethard Castle, the churches at Bannow and Tomhaggard, St. Mary’s Church in New Ross and St. Dubhán’s Church – all sites along the Norman Way.