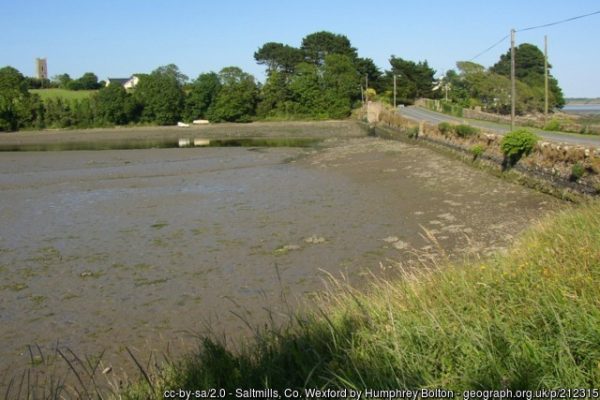 When the Norman knight William Marshal was caught in a dangerous storm crossing the Irish Sea he fell to his knees and prayed, vowing to establish a religious house if he survived his journey. After his ship landed safely on the coast of south Wexford Marshal founded the nearby Cistercian abbey at Tintern.

Monks from Wales
Tintern Abbey in Wexford was populated by monks from the mother house of Tintern in Wales and the abbey which Marshal founded became known as ‘Tintern de Voto’ or Tintern of the Vow.

The Villages of Tintern and Saltmills
The village of Tintern was originally situated beside the abbey. In the 19th century the estate owner cleared the village and relocated it to the neighbouring townland of Saltmills.

Medieval Tidal Mill
Saltmills gets its name from the tidal mills built here by the monks of Tintern Abbey. The monks were a farming order who produced large quantities of grain. They harnessed the power of the tide to grind their grain into flour. Twice a day the rising waters of the tide would fill an enclosed pond. The water was then directed through a narrow channel to turn a circular millstone in a mill building sitting above the water.