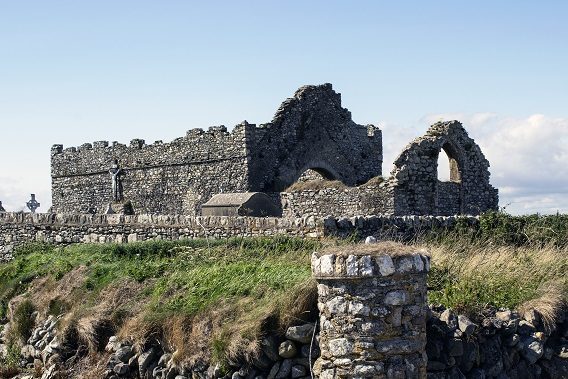 The Normans built a settlement here at Bannow just a few hundred metres from the site of the first landing of Norman forces in Ireland.

The church in the graveyard here is dedicated to St. Mary and was standing here by the year 1200. It is the only visible surviving evidence of the medieval town of Bannow.

Where It All Began
In May 1169 a force of about 400 Norman knights, archers and men-at-arms landed on the sandy shores of Bannow Island. They were met by Irish warriors loyal to Diarmuid McMurrough, the deposed King of Leinster, who had requested the aid of the Normans to regain his kingdom. The combined army quickly marched to the Norse town of Wexford where, after a short siege, they defeated the descendants of the Vikings who had founded the port and settlement there.

The Birth of a Norman Town
Over the next 100 years a new Norman town grew up here at Bannow. The only visible remnant of this historic town is the church named after St. Mary.

Set around St. Mary’s Church the town of Bannow had six streets of thatched houses and a small castle as well as a port sheltered from winter storms behind this headland. A water mill ground flour for the needs of the local community. Rent returns suggest that around 160 families lived here in the year 1300.

The Church
Although roofless, St. Mary’s Church is a fine example of a ‘nave and chancel’, or two-roomed, medieval church. The church also has a crenellated, or battlemented wall-top and ornate funerary carvings inside.

Trade – the Life and Death of a Medieval Town
The Norman conquest of Ireland, although initiated by a deal with Diarmuid McMurrough, became focused on the seizure of land, the building of towns and the export of Irish agricultural wealth. The port town of Bannow thrived on trade between Ireland, Britain and mainland Europe. In the mid-14th century, like other small Norman towns in Ireland, Bannow went into decline.

In 1348, the Black Death, which was already affecting European populations, arrived in Ireland. Transported by trading vessels, the plague had a greater impact on port towns like Bannow than on the rural dwellers of the Irish countryside. In 1348 and ’49, as many as 50% of the residents of Bannow may have died of the disease.

Bannow never recovered from the ravages of the plague and an economic disaster created when its harbour silted up. By the 17th century, the town was in ruins and almost completely abandoned.