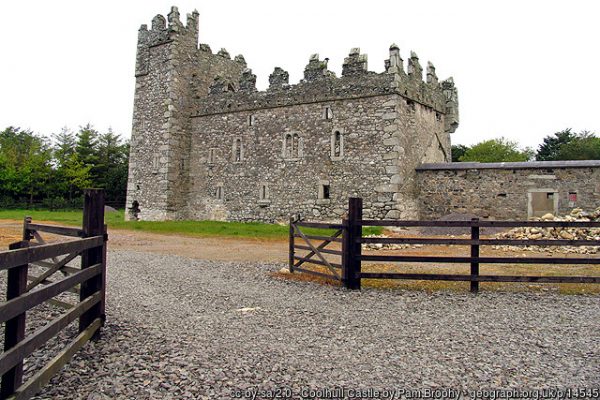 Coolhull Castle is a fine example of a late medieval fortified home. It was probably built in the second half of the 16th century. There are no references to the original builders of the castle but it was owned by the Devereux family in the 17th century.

The Last of the Castles
Coolhull was one of the last castles to be built in Wexford. By the 17th century the battering rams and crossbows which the medieval tower houses were constructed to resist had been replaced by more formidable cannons and muskets.

Realising that there was no point living in narrow, draughty towers that could be quickly defeated by modern technology, landowners started to build more comfortable, lightly defended, fortified houses instead.

A Mix of Old and New
This castle’s main element is a spacious fortified house but it still retains a defensive tower at one end. The tower has certain medieval features such as an ‘oubliette’ (a storage chamber which could also be used as a dungeon), but it also includes more modern features such as musket loops, through which those inside the castle could shoot at attackers outside.

Defensive Features
Coolhull Castle has defensive features such as the overhanging corner at the top of the tower called a ‘bartizan’, through which missiles could be dropped on attackers; arrow slits and musket loops; and fine battlements at the top of the building.