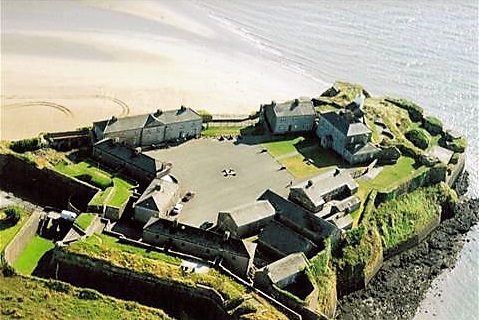 The name ‘Duncannon’ comes from old Irish and means ‘the fort of the son of Conan’, which points to the fact that a promontory fort was located here  prior to the arrival of the Normans.

Duncannon Fort
The military-minded Normans saw the value of this location in terms of defending the local coastline on one of the busiest shipping routes to and from Ireland. Early maps show a medieval tower house standing on the promontory where the fort is now located.

Over the centuries, and in response to foreign threats ranging from the Spanish Armada to the First and Second World Wars, the defences here grew to become the substantial fortress you see today. Duncannon Fort was used by the Irish Defence Forces until the 1980s.

The Christian Diet of the Normans
The Normans maintained a fish weir here at Duncannon. Fish weirs have been used in Ireland since the prehistoric period. A stone wall or timber fence was used to direct fish swimming up or down river into a basket-like trap or net placed at a suitable point in the water.

Fish weirs became particularly important after the introduction of Christianity. During the medieval period Christian rules dictated that meat could not be eaten on certain weekdays or during the 40 days of Lent. Fish, for those people who could afford it, became an important alternative to meat at these times.