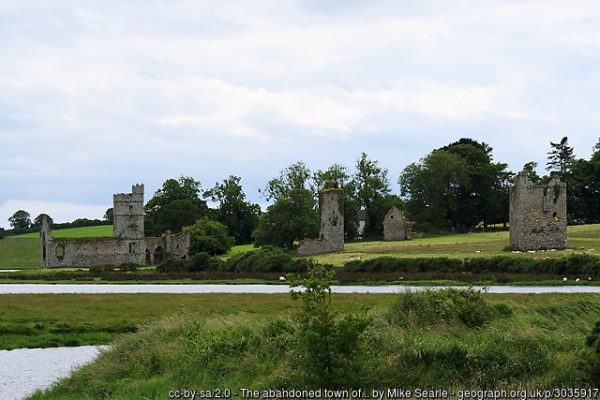 The medieval ruins visible across Bannow Bay from the Little Sea are all that remains of the town of Clonmines (photographed from a different angle above), the best example of a deserted medieval settlement in Wexford.

Foundation and Failure
In the early years of the Norman conquest new towns and settlements were established all over Wexford. These towns attracted settlers from Britain and served to export the agricultural goods of the new colony.

Like its neighbour Bannow, Clonmines thrived for a few generations after its foundation. Ultimately however the town declined due to several factors including conflict, the arrival of the Black Death in 1348 and the silting of the shipping channels through Bannow Bay.

Clonmines Today
Much of Clonmines’ architecture remains intact. The tall building to the right is the ‘Black Castle’, recorded as the home of the Fitzhenry family. The most impressive structure is the church of the Augustinian friars who once tended to the spiritual needs of the townspeople. The parish church of the town also survives, as does a second tower-house.

For centuries after the town’s abandonment, people continued to gather at a holy well on the site to celebrate the feast of St. Nicholas on the 6th December.

Admire the views of Clonmines and imagine trading vessels on Bannow Bay bringing in casks of French wine to the medieval town,with bales of Irish wool going out in return.

Clonmines is now in private ownership so please do not visit the site itself.